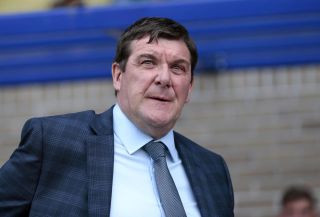 St Johnstone manager Tommy Wright admitted the spark for his side’s 3-2 win over Hamilton was provided by the Perth side’s midfield.

David Wotherspoon struck a pair of goals before substitute Callum Hendry netted the winner in the final minute to bag Saints’ first win of the campaign.

After falling behind to a first-half Mickel Miller goal, Saints regrouped and, inspired by Wotherspoon’s classy strikes, they were in control.

A Murray Davidson handball six minutes from the end appeared to have allowed Steven Davies to snatch a point from the penalty spot for Accies.

But Hendry – son of former Scotland star Colin – popped up with his third of the season from the bench to secure a well merited three points.

“David is a wonderful footballer, he’s two footed and he showed what he can do,” said Wright.

“That was his 250th game for the club and he’s been a great player for us over the years.

“Ali McCann was also outstanding. He’s as good a young midfielder in Scotland at the moment – if not the best one.”

The 19-year-old Northern Ireland starlet has impressed in the St Johnstone line-up, despite their long wait for a win.

Wotherspoon should have netted a hat-trick but, like Drey Wright earlier, he passed up an open goal.

The Canadian international also hit the post, while Davidson rattled the Accies crossbar.

“It would have been a travesty if we hadn’t won that game because we dominated from start to finish,” said Wright, whose thoughts are turning to a midweek clash with Hearts as Saints bid to escape the basement.

“The win was fully deserved. We should have been out of sight long before Callum’s goal.

“When you lose a penalty right at the end, your concern is how they respond.

“But they went on the front foot again and got the winner they deserved.

“They have been through a hard time but I have said it before, this is a young squad and we need to stick with them.

“The disappointing thing for me is that the three should have been six or seven and the two they got should be zero because we gave away two soft goals.”

Accies boss Brian Rice thought his side would leave Perth with a point after the Davies spot-kick leveller.

“If you score two away from home you should be getting something,” he said.

“Every point is precious. It’s tight down at the bottom of the league and you need to pick up as many as you can.

“We have a game in midweek to look forward to now and I think that’s a good thing because when you lose you want to get playing again as quickly as possible.

“Aberdeen will be a tough game but we will be ready to go again.”