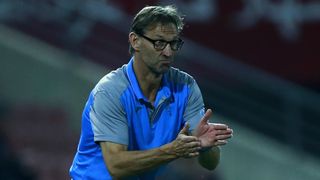 Granada took another step towards LaLiga relegation in the Arsenal legend's dugout debut at Los Carmenes on Sunday and they now sit seven points adrift of safety with six games to play.

Adams replaced Lucas Alcaraz after last week's home defeat against Valencia extended the club's run of poor form to one point from six games and vowed to give his new players "a kick up the a**e".

But Granada were comfortably beaten by mid-table Celta, Jozabed's first-half strike sending the visitors on their way.

Uche came closest to an equaliser for Adams' side when he thumped a long-range drive against the crossbar, but Marcelo Diaz's brilliant free-kick ended the game as a contest before Claudio Beauvue scored from the rebound after Theo Bongonda had hit the post in a late Celta counter-attack.

Things do not get any easier for Adams, whose team will travel to face Jorge Sampaoli's Sevilla next Friday.