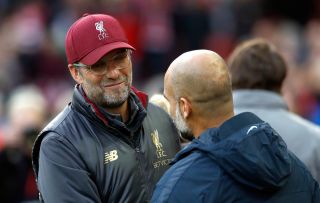 City have started their season with a win for the last eight years in succession while the Reds have won five of their last six.

And with West Ham and Norwich respectively awaiting them, there appears little resistance this time around.

Sergio Aguero has the most opening-day goals in the Premier League among the competition’s active players, with six. He has not netted in any of those three wins at the London Stadium but did score there in January 2017’s 5-0 FA Cup win.

West Ham’s run of poor starts is mitigated by their opponents – after Tottenham, Arsenal, Chelsea, United and Liverpool, the visit of City sees them complete the full set of “big six” opponents in successive seasons.

The only blemish on Liverpool’s recent record is the stoppage-time equaliser they conceded to Watford in their 2017 opener, and they face a Canaries side with only two wins on opening day in the last 20 years.

United have won their last four opening-day fixtures and eight out of 10, while Chelsea have only lost once on opening day in the last 20 years – although that came the season before last against Burnley.

Watford have the longest unbeaten run among current top-flight clubs at 12 games, though eight of those came as a Championship club and the run is evenly split between draws and wins.

Last season’s 2-0 win over Brighton was their first on opening day since returning to the top flight and the Hornets have the same fixture this time around.

Arsenal have lost three of their last four opening fixtures but face a Newcastle side who are winless in six, with the Magpies’ only point coming courtesy of 2015’s 2-2 draw with Southampton.

Tottenham will look to build on back-to-back opening wins when they face promoted Aston Villa, who have only one defeat in their last six curtain-raisers. Harry Kane broke his August duck last season but has still never scored in the first game.

Southampton have started with a draw four years in a row, against Newcastle, Watford, Swansea and Burnley, and the Clarets have another chance to end that run this year.

Everton are unbeaten in seven, though with only two wins, and face a Crystal Palace side who have begun with a defeat in six of their last eight campaigns.

Wolves, unbeaten in six opening games, face a Leicester side who have lost three in a row while Bournemouth, with two wins in their last five openers, host Sheffield United who have won only one out of five.