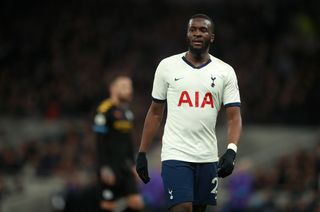 Tottenham are not willing to sell record signing Tanguy Ndombele amid reported interest from Inter Milan.

The Frenchman, who has also been linked to Barcelona and Bayern Munich, has had a torrid first year in English football and made just 17 starts following his £55million move from Lyon.

However, the PA news agency understands Spurs are not in talks with Inter or any other club and are committed to their investment, with chairman Daniel Levy not prepared to sell a player who they believe can come good.

Ndombele has shown flashes of brilliance but his first season in the Premier League has been undermined by fitness issues, while he has also taken time to adapt to the new culture without speaking much English.

Spurs, including boss Jose Mourinho, are willing to be patient with the 23-year-old, believing they have a major asset in the squad.

Mourinho has tried different ways to get the best out of the midfielder, including several public dressing downs.

The Portuguese complained Ndombele was “always injured” in January and then said his player had to give more after he was hauled off at half-time of the 1-1 draw at Burnley in March – his last start of the season.

But recently Mourinho has said he “will not give up” on Ndombele.

It is time to bid farewell to our friends at @NorthMidNHS, who will be transferring their Women’s Outpatient Services, accommodated at Tottenham Hotspur Stadium since April, back to the hospital over the weekend. 💙#THFC ⚪️ #COYS— Tottenham Hotspur (@SpursOfficial) July 31, 2020

Meanwhile, Tottenham’s stadium is no longer being used as an outpatient’s unit for North Middlesex Hospital.

The dressing room, interview rooms and media cafes were used by the hospital throughout the height of the coronavirus pandemic to treat pregnant women, with 41,500 appointments delivered since April 14.

Levy said: “We are extremely proud of how successful the transferal of North Middlesex’s Women’s outpatient services to the stadium has been during these unprecedented times.

“I have seen first-hand how much of a lift being within the stadium setting has given the hard-working staff and how comforting the experience has been for patients that have visited.

“Whilst we are encouraged that NHS services can now safely return to the hospital, we are aware that the fight against COVID-19 is far from over and the club will continue to offer its assistance to our community in any way we can.”