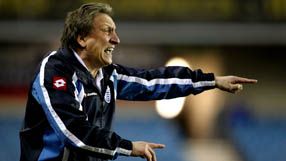 The West London club were charged by the Football Association over breaches of the rules regarding agents and third-party ownership in connection with their signing of Alejandro Faurlin for 4.3 million pound from Argentine club Instituto de Cordoba in 2009.

"The charges concern the alleged existence of an agreement between the club and a third party in respect of the player's economic rights and the alleged failure by the club to notify the FA of that agreement before the player was registered," the FA said in a statement.

The club have also been charged with using an unauthorised agent and submitting false documents when Faurlin extended his deal last year.

QPR, seven points clear at the top of the Championship, issued a statement.

"Having co-operated fully with the FA's investigation, QPR and (chairman) Mr Paladini shall be denying all of the charges and requesting a formal FA hearing to determine them," teh statement said.

"QPR and Mr Paladini are confident that there has been no deliberate wrongdoing involved."

If found guilty QPR face a range of penalties from a fine to a points deduction, with the latter option likely to have a major impact on their bid to return to the top flight for the first time since 1996.

The case has similarities to that of Argentines Carlos Tevez and Javier Mascherano, whose arrival at West Ham United in 2006 sparked a series of court cases and inquiries and led to the FA changing its rules on third-party ownership.

West Ham were fined 5.5 million pounds but avoided a points deduction, saving them from relegation.

Sheffield United, who were relegated, were furious and although they failed to have the decision overturned they did eventually win 25 million pounds in compensation from West Ham.

Sheffield United's manager was Neil Warnock who was fiercely critical of the FA at the time. Warnock is currently the manager of QPR.