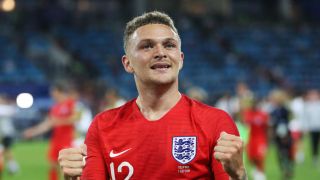 Kieran Trippier believes England are simply being a cleverer side than they have been at previous major tournaments after the approach of Gareth Southgate's side in their win over Colombia was questioned in some quarters.

The Three Lions prevailed 4-3 on penalties after a tempestuous encounter in Moscow ended 1-1 – setting up a quarter-final meeting against Sweden on Saturday.

Referee Mark Geiger struggled against a tide of incidents throughout the match, with Colombia defender Wilmar Barrios only booked for a first-half headbutt on Jordan Henderson and Jose Pekerman's side causing a lengthy delay between the award and conversion of Harry Kane's 57th-minute spot kick.

That was the third penalty awarded to the Three Lions during Russia 2018 and Pekerman criticised England for going to ground too easily before a local journalist put a similar observation to Southgate.

Manchester United manager Jose Mourinho then joined in the chorus of disapproval while working as a pundit on Russia Today, labelling a tumble from Harry Maguire in the Colombia area as "theatrical".

When this was put to Trippier, who coolly dispatched England's crucial fourth penalty in the shoot-out, the Tottenham wing-back laughed and shook his head before offering a pointed response.

"Sometimes it’s about being clever," he said. "It’s game management as well. You see Colombia had 20-25 minutes where they were on top.

"Sometimes you just need to kill the game a bit. If someone makes contact with you, it is a foul and you are going to go down.

"Everyone has got their own opinion and that's a fact. You see Hendo's one and I don’t know how [Barrios] got a yellow card for that.

"Teams have done it to us for many years. Teams have gone down easily - and you saw Colombia.

"I went for a tackle with [Radamel] Falcao and he just dropped to the floor and I just said to him 'just get up'... not quite like that.

Southgate's men came in for some rough treatment during the 6-1 group-stage romp against Panama and a youthful side showed they could certainly hang tough with such an approach against Colombia.

"England have got some fantastic players here and some players are going to want to go in a bit hard and try to rough them up a bit," Trippier observed before reiterating his original point.

"But if someone touches you, you are going to go down. No matter where it is on the pitch. It's game management, it’s being clever."

A television audience of 24 million watched the Colombia game in the UK, the latest sign of the English public reconnecting with its national team.

The reaction from past and future opponents in Russia has perhaps not been so positive.

"They've not been under that much pressure, I think their opposition has backed off quite a bit, so they've been given the opportunity to move it nice and slow.

"So that is a big question for me, whether they'll be able to open us up if we press them higher, and what would be the effects on our own game. We'll find out."

Much like Colombia's roughhousing, such observations appear unlikely to make a dent upon Trippier and his colleagues.

"We know what we’re doing," he added. "I haven’t got an issue with those comments, we just need to focus on ourselves and play like we do. In my eyes we can hurt anyone."