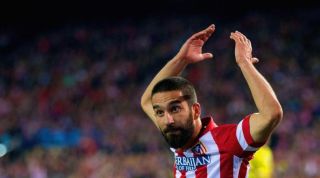 Diego Simeone's side will be expected to secure their second victory in Group A at Vicente Calderon, where they beat Juventus 1-0 at the start of the month.

On the same night Malmo overcame Olympiacos 2-0 in the first Champions League game to be played on Swedish soil for 14 years, courtesy of a Markus Rosenberg double.

And Turkey midfielder Turan has warned his team-mates that the Liga champions could be punished if they are not at their best.

He told FIFA.com: "We'll need to take care with Malmo – we have a lot of respect for them.

"At home they play very well and remember they went in 0-0 at half-time away to Juve [before going on to lose 2-0].

"This is the Champions League and if we're careless or adopt an attitude of 'we're a big team, we'll win all our games', then we'll be eliminated pretty quickly."

Atleti were beaten by city rivals Real Madrid in a dramatic Champions League final last season and Turan, who scored the winner against Juve, has stressed the importance of winning the group as they attempt to go one better.

"Just like last year, we want to try and compete right to the very end," he said.

"In the case of the Champions League, firstly we'd like to come out of our group, and as winners, because that gives you home advantage in the return leg of the first knockout round.

"However, that will be very tough to do. In fact, in my four years here, the toughest game I've experienced was that Champions League home game of ours against Juventus."

Midfielder Tiago could miss out against the Swedish champions after suffering a thigh injury in Saturday's 2-0 home victory over Espanyol.

Malmo became the first side to retain their Swedish title since 2003 earlier this month, but they were consigned to only their third Allsvenskan defeat of the campaign against Elfsborg on Saturday.

Age Hareide's side will be up against it when they face an Atletico side that have won 18 of their 20 matches in UEFA competitions at fortress Vicente Calderon.

The victory over Olympiacos was their first in a group game in Europe and they will be licking their wounds after a 13-game unbeaten run at home came to an end against Elfsborg in the Allsvenskan on Saturday.