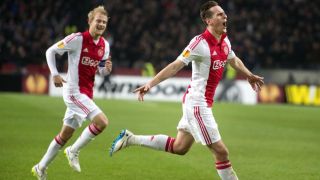 Frank de Boer's men recorded a 1-0 win in the first leg thanks to Arkadiusz Milik's goal.

And an empty Stadion Wojska Polskiego awaits Ajax due to UEFA sanctions imposed on Legia Warsaw for racist behaviour.

The second leg against Ajax is the second game of that two-game ban.

Speaking after the first leg, De Boer said he was optimistic about his team's chances of progressing.

"I feel positive, but we need to wait and see," he said.

"But if we play the same game we did in the first half, they’ll have a hard time.

"It's in our advantage that we kept a clean sheet. It’s in our own hands now and we need to ensure we go through.

While the Eredivisie outfit hold an upper-hand, Serie A giants Roma travel to Feyenoord after a 1-1 home draw.

Rudi Garcia's men have drawn three straight matches and need to turn their form around when they visit the Netherlands.

Premier League sides Liverpool and Tottenham both face second-leg tests away from home.

Liverpool head to Besiktas with a 1-0 aggregate lead, while Fiorentina and Tottenham drew 1-1.

Everton are cruising against Young Boys, with Romelu Lukaku having inspired their 4-1 win in Switzerland.

Rafael Benitez's Napoli crushed Trabzonspor 4-0 in Turkey ahead of hosting the second leg.

Inter and Celtic played out a thrilling 3-3 draw in Scotland, putting the Serie A side on top in the tie.

Elsewhere, PSV head to Russia after suffering a 1-0 home loss to Zenit.

Club Brugge are 3-1 up ahead of hosting Aab, while Athletic Bilbao hold the upper-hand over Torino after their 2-2 draw in Italy.

The in-form Bas Dost's Wolfsburg are 2-0 up heading to Sporting Lisbon, Olympiacos need to overturn a 2-0 deficit when they host Dnipro Dnipropetrovsk and Dinamo Moscow host Anderlecht after a 0-0 draw in Belgium.

Sevilla carry a 1-0 lead to Borussia Monchengladbach, Guingamp visit Dynamo Kiev after a 2-1 first-leg win and Villarreal are 2-1 up ahead of a trip to Salzburg.