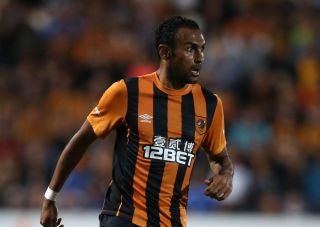 Steve Bruce's men need a second-leg turnaround on Thursday following a 1-0 defeat in Belgium last week, Hans Vanaken scoring the only goal after a calamitous clearance from goalkeeper Allan McGregor.

It is a familiar story for the Premier League side, who required a late strike from Sone Aluko to sneak past Trencin in the previous round, and they will need to win by two goals to guarantee progression and keep their maiden European campaign alive.

A passionate sold-out home following roared Hull to victory against the Slovakian side on a historic night in east Yorkshire and Elmohamady has called on Hull's fans to provide the inspiration once again.

"We know we have to win by two on Thursday, but after the first game we are confident," he told the Hull Daily Mail.

"We want to keep the fans happy by winning and getting to the group stage, that's our aim.

"The stadium will be full like when we played Trencin, and I believe it will be the same atmosphere with the fans behind us.

"We came through that game and I believe we can get the result again to keep everyone happy."

Bruce made nine changes from his previous Premier League side for the first leg, and has revealed he will give more playing time to players who helped the club climb out of the Championship and reach last season's FA Cup final.

That likes of Aluko, George Boyd and Yannick Sagbo are set to come in with Tom Ince and Nikica Jelavic dropping to the bench - despite impressive outings as substitutes in the first leg.

McGregor played in Sunday's 1-1 draw with Stoke City having struggled with a shoulder injury in the build-up, meaning Robert Snodgrass (knee) is Hull's only definite absentee.

The Belgian Cup winners have no fresh injury concerns and could welcome back South African midfielder Ayanda Patosi, who is close to recovering from a knee problem picked up in pre-season.

Bruce's side will take comfort from the fact their opponents have never won a competitive fixture in England, having tasted defeat to Manchester City in 2003 and Newcastle United two years previously.

The mood around the KC Stadium is likely to have been boosted further by the capture of long-term transfer target Michael Dawson from Tottenham for an undisclosed fee. The 30-year old has signed a three-year deal at the club, but is ineligible for the encounter.