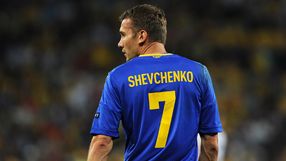 The 35-year-old's deal with Dynamo Kiev, the club where he began his career before moving to AC Milan, is due to expire in July and he has expressed interest in a move to North America's Major League Soccer.

He said he needed time to think hard about his next step and would make a decision "in a week or two".

"At the moment, I have not made a decision about my future - whether to continue playing football or retire, whether to stay in Ukraine or leave the country," he said during a visit to his old school in Kiev where he was mobbed by well-wishers.

"I have offers from clubs abroad and from Dynamo Kiev. Let me take a breather after the Euros and make a decision. I will certainly stay in football... football is a bit more than a game for me. It is what I live for," he added.

Shevchenko, regarded as the finest player that post-independence Ukraine has produced, was a record marksman for his country scoring 48 goals in 111 appearances.

The former Chelsea forward crowned his international career with two headed goals in the co-host's 2-1 victory over Sweden this month, though Ukraine failed to progress out of the group stage.

Shevchenko has chronic problems with his back and left knee and said that the state of his health would be an important factor in any final decision about his future.

After Sunday's quarter-final between England and Italy, which Italy won on penalties after a 0-0 draw, he congratulated his old AC Milan team mate Andrea Pirlo - who had a great game and scored with a cheeky dinked penalty.

"I think yesterday the stronger side won. Italy showed more quality than England and had more chances to score. That's why Italy deserved some luck in a penalty shootout," he said.

He declined to say who he thought would carry off the Henri Delaunay trophy after the final in Kiev on July 1.

"It is really hard to predict. Four of the strongest teams have made their way to the semi-final," he said of holders Spain, Portugal, Germany and Italy.

"They are all well prepared physically and psychologically. We can expect very interesting semi-finals and great entertainment in these games."