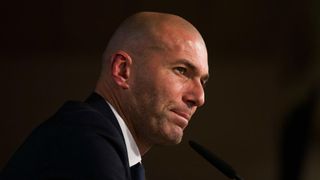 Former Bayern Munich coach Ottmar Hitzfeld says Zinedine Zidane is living off his reputation as a player and has "won the lottery" by landing the Real Madrid job.

Zidane was installed as Rafael Benitez's successor after the Spaniard was sacked on Monday following an uninspiring start to the season.

The former France international's playing record is not in question, having won three domestic league crowns, the Champions League, a European Championship and a World Cup among a host of other titles, including being named FIFA World Player of the Year on three occasions.

However, after limited experience in charge of Madrid's Castilla team, Hitzfeld feels Zidane is somewhat fortunate to have been given the top job at the Santiago Bernabeu.

"For him it is like winning a lottery. Insane, crazy," Hitzfeld told Blick.

"He is a manager without any experience. He only lives from his famous name as a player.

"He hasn't proved anything as a manager yet and now he has to deal with the best players in the world."