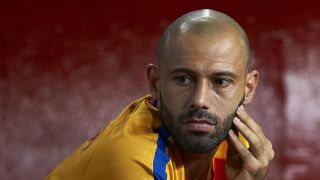 Ernesto Valverde opened the door for Javier Mascherano to return to Barcelona as a coach following confirmation of the veteran's impending move to China.

Mascherano will join Hebei China Fortune on Friday for a reported €10million, ending a seven-and-a-half-year stay at Camp Nou.

Those sentiments were echoed by Valverde, who believes Mascherano has what it takes to become a success.

"He is a role model for everyone here [at Barca] and outside as well," Valverde said.

"You can see how he thinks, he understands the game. He is almost like a coach himself during the game.

"He is a player who is close to the end of the career. He has got that bug and he is surely going to try it, because if you do not try it you will always be wondering."

Emotional farewell to a dedicated player who left his mark at the club. Thank you for believing in the power of dreams with us. Barça is your home January 24, 2018

While open to the prospect of staying in football after his retirement, Mascherano insists he is not yet thinking about the next phase.

"I think that is more an idea which other people have proposed rather than my own," he said at Wednesday's farewell event.

"Maybe I will consider it in the future. I like the idea of being a coach but now is not the time.

"I am grateful to the club directors who see me as a coach. They have always said that I would make a good coach."