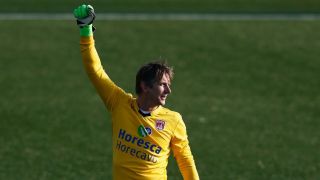 Edwin van der Sar enjoyed a successful comeback at Noordwijk as the former Netherlands international stopped a penalty for the Hoofdklasse B side in their 1-1 draw with Jodan Boys on Saturday.

The 45-year-old denied Jorn van Lunteren from the spot shortly before the interval, although he was eventually beaten by Mo Bellahcen late in the second half.

Jaap van Duijn salvaged a draw for Van der Sar and his team-mates with a well-taken free kick in the dying seconds of the encounter.

Noordwijk had asked Van der Sar to make a one-time comeback after first-choice goalkeeper Mustafa Amezrine was ruled out of this weekend's encounter with a knee injury.

He previously played for Noordwijk between 1985 and 1990 before making the step to professional football at Ajax. He also wore the jerseys of Juventus and Fulham during his illustrious career - and eventually retired at Manchester United in 2011.

Van der Sar's temporary comeback to Noordwijk led to plenty of uproar at the fourth-tier club, with back-up goalkeeper Sven van Hensbergen opting to leave the following their decision to ask the current Ajax director to make a comeback rather than rely on one of Amezrine's deputies, while fellow shot stopper Dammes van der Poel is considering his options.