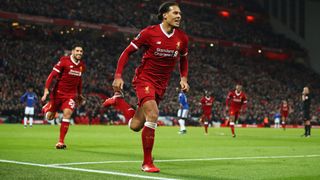 Liverpool manager Jurgen Klopp hailed Virgil van Dijk for a "fairytale" debut after the defender scored the winner in a 2-1 FA Cup victory over Everton Friday.

Van Dijk, signed for a reported £75million in January, headed in a dramatic 84th-minute winner on debut at Anfield.

Klopp lauded the Netherlands international, revealing he only decided to hand Van Dijk his debut on game day.

"Nice one [Van Dijk's debut]. A fairytale in a world with not a lot of fairytales anymore, so I think something like that is quite special," he told a news conference.

"It was a difficult decision to make. To be 100 per cent honest, the first plan was not to start him but then Dejan [Lovren] and Raggy [Ragnar Klavan] played a lot of games in the last few weeks, so I changed my mind this morning [Friday]. And it helped.

"They [had] little muscle issues, but could have played with a little higher risk than usual.

"I made the decision this morning that Virgil will start – and obviously it was a good idea in the end because the whole game was good."

James Milner's first-half penalty was cancelled out by Gylfi Sigurdsson before Van Dijk headed in an Alex Oxlade-Chamberlain corner.

"He was much better than I thought, to be honest, because it's difficult, it's always difficult," he said.

"I said before the game that my expectations are easy to reach because I know how good he is and so I only want him to show that.

"I still know that he's a human being and things can happen that he can show it tonight, things like this happen.

"But we all know that expectation can lead to pressure and then you look a little bit different than you look usually, and he obviously could stand the pressure."