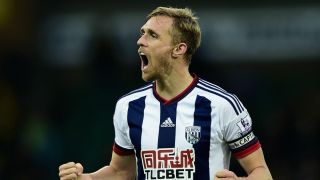 The trio all left United for West Brom this year in search of first-team football and could feature against their former employers in the Premier League on Saturday.

Valdes meanwhile has not featured for the club this season, following a bust-up after Van Gaal claimed the goalkeeper refused to feature in the Under-21 team.

The former Barcelona goalkeeper denied the claims but, as rumours persist regarding a January exit, Van Gaal spoke of his respect for the three who left United.

Asked about Fletcher and Evans, Van Gaal responded: "You forget Lindegaard, he was also a member of my squad.

"I think it's very good because I always try to be honest with my players and I said to them 'your playing minutes are not going to be too much'.

"At your age you have to play but to make the decision to leave Manchester United for another club is a big one. To have made that decision out of ambition I like very much.

"You could decide to stay and not play, only train. There are a lot of players doing that but I have great respect for these three."