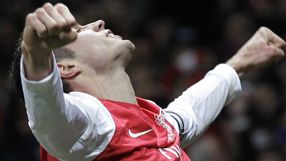 Van Persie, 28, was the first Dutchman to win the prestigious honour since Dennis Bergkamp, also of Arsenal, in 1998 and the third player from the Netherlands to do so following Frans Thijssen of Ipswich Town in 1981.

He topped the poll of journalists with a landslide victory ahead of Manchester United team mates Wayne Rooney, who won the award in 2010, and Paul Scholes who was third after coming out of retirement halfway through the season. Fulham's United States striker Clint Dempsey was fourth.

Van Persie's 34 goals in all competitions have lifted Arsenal into the top three in the Premier League, leaving them on the brink of Champions League qualification after a very poor start to the campaign.

FWA chairman Steve Bates told Reuters: "Robin was the overwhelming choice of our members this season and deservedly so after a magnificent campaign for Arsenal. The quality of his goals, attacking movement and consistency in a turbulent season for The Gunners has been eye-catching.

"The considerable size of his majority in the votes cast by our members reflected the general view that he has been the season's most outstanding individual performer."

The Footballer of the Year award is the oldest of its kind in world football and was first awarded to Stanley Matthews in 1948.