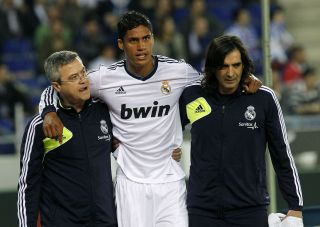 The Frenchman, 20, burst to prominence last season with a number of assured performances, including man-of-the-match outings against Barcelona in the Copa del Rey semi-finals.

However, he missed the end of the campaign after suffering a knock to his knee against Espanyol in May, and has not featured since.

Varane had initially set a comeback target of pre-season for Madrid, but he has yet to make an appearance as new manager Carlo Ancelotti prepares for his first competitive game as coach against Real Betis on Sunday.

But the defender remains confident that he will soon be fit to feature, rubbishing rumours that complications could rule him out for longer than expected.

"My programme of recovery and strengthening of the knee remains the same," Varane posted on his official Twitter page.

"There has been no particular complication."