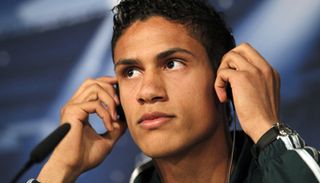 The France international was hurt in Saturday's 1-1 draw at Espanyol and had an operation in his homeland at a clinic in Beziers, Real said on their website.

It is not known how long he will be sidelined but coach Jose Mourinho said he would miss Friday's King's Cup final against Atletico Madrid.

Local media have reported the 20-year-old will be out for four to six weeks.

Varane's injury also makes it unlikely he will be available for France's tour to South America next month when they are due to play in Uruguay on June 5 and Brazil four days later.

Coach Didier Deschamps is due to name his squad on Thursday.

Varane has won himself a starting place alongside Sergio Ramos in the centre of the Real defence in recent weeks, keeping more experienced team-mates such as Pepe, Ricardo Carvalho and Raul Albiol out of the side.