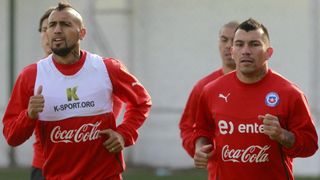 The former Juventus star was doubtful ahead of Thursday's game due to a knee injury, but eventually featured for the full 90 minutes, irrespective of his physical problems.

Vidal is likely to feature from the start once more in Chile's upcoming qualifier against Peru and Medel has hailed his team-mate's dedication to the national team.

"Vidal has put his own career at risk for us," Medel said at a press conference.

"Arturo gives everything for his country of birth."

Vidal, 28, was a key figure for Chile as they emerged victorious at the 2015 Copa America on home soil, but also made headlines for all the wrong reasons when he crashed his Ferrari while under the influence of alcohol during the tournament.

The combative midfielder joined Bayern from Juve ahead of the 2015-16 campaign and has since developed into an important first-team member for Pep Guardiola.

He has so far scored twice in 11 appearances in all competitions.