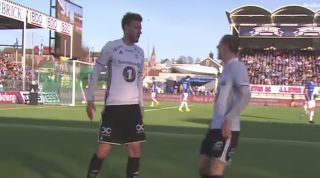 The Norwegian champions beat Sarpsborg 2-1 to maintain their place at the top of the Eliteserien table with six games played.

The deadlock was opened in the ninth minute by Bendtner, who latched onto an Anders Konradsen through-ball before expertly steering the ball into the top corner with the outside of his boot.

The Denmark international's goal was his third of the season, which is already more than he scored in his six months at last club Nottingham Forest, and one eighth of the league tally he managed for Arsenal from 2005-14.

It's no wonder Norway is one of the happiest countries in the world when Bendtner is banging the goals in.