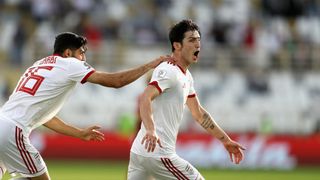 A goal in each half from star forward Sardar Azmoun sealed a routine 2-0 win for Iran over Vietnam and a place in the knockout stages of the Asian Cup for Carlos Queiroz's side.

Azmoun was on target during his country's 5-0 rout of Yemen and headed the opening goal at Al Nahyan Stadium seven minutes before half-time.

Iran's superior quality was more tellingly felt after the break, with the Rubin Kazan attacker sealing the points in the 69th minute.

Back-to-back losses mean Vietnam will need a handsome victory over Yemen in their final group game to retain any chance of qualification.

Park Hang-seo's side were easy on the eye during the opening stages but lacked cutting edge, with Azmoun showing them how it should be done.

Vietnam keeper Dang Van Lam kept out his 26th minute strike but was left scampering across his goal in vain when Saman Ghoddos dug out a cross for Azmoun to convert at the far post.

Score
Run to the fans
Celebrate!

Iran substitute Ahmad Noorollahi passed up a glorious chance when he was left entirely unmarked from a free-kick midway through the second half.

He would not regret such wastefulness however, as Queiroz's men finally made their threat on the break pay.

Iran conclude their round-robin campaign against neighbours Iraq, who will look to make it two wins out of two against Yemen later on Saturday.