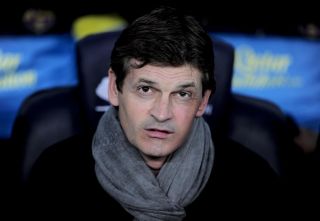 Spanish media outlet Radio Nacional have reported Vilanova was rushed to the Clinica Quiron's emergency room in Barcelona for surgery after being hospitalised last week when his health deteriorated.

While no other details have been released, Radio National also reported the 45-year-old cancer patient had suffered gastric complications and remains in a serious condition.

Vilanova has been fighting cancer in his parotid gland for more than two years after having a tumour removed in 2011.

The Spaniard was forced to stand down from his managerial position ahead of the 2013-14 La Liga campaign after suffering a relapse.

Vilanova was replaced by Gerardo Martino at the helm as he underwent treatment.

Prior to that, Vilanova had guided Barcelona to the league title in his sole season in charge in 2012-2013, following Pep Guardiola's departure.

The Catalan giants reached the 100-point mark that campaign, only the second team after arch rivals Real Madrid to do so.