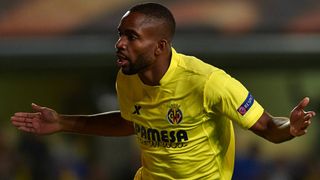 Cedric Bakambu struck twice as Villarreal beat a depleted Sparta Prague 2-1 in the first leg of their Europa League quarter-final at El Madrigal on Thursday.

Sparta goalkeeper David Bicik gifted Villarreal the opener in the third minute, dallying and hitting a clearance off striker Bakambu, which ricocheted into the net.

Ladislav Krejci's goal was rightly ruled out for Sparta and Bicik made a string of saves before Jakub Brabec headed a potentially key away goal in first-half injury time.

Bakambu put the hosts back in front after half-time with a superbly taken effort after Denis Suarez created space on the edge of the penalty area.

Bicik made yet more saves in the second half to keep Sparta, one of two unbeaten sides in the competition, within touching distance, as Bakambu was denied a hat-trick by the goalkeeper's excellent reactions.

Injury-hit Sparta's task is made tougher by Mario Holek limping off and Brabec and Costa Nhamoinesu both collecting bookings that rule them out of the second leg.

Their evening got off to a shocking start as Villarreal took the lead inside three minutes, goalkeeper Bicik taking too long on the ball and allowing Bakambu to charge his clearance down and deflect it into the net.

Mario should have doubled Villarreal's lead after nine minutes, turning a corner over the crossbar from close range after Victor Ruiz’s flick.

Bicik then saved from Samu Castillejo and Roberto Soldado planted a free header wide as the visitors, who were unable to name a full substitutes bench due to injuries, struggled early on.

Krejci had a goal disallowed for offside after 20 minutes before Bakambu nearly profited from another defensive error, this time by Brabec, but Bicik saved well with his feet.

Bicik was keeping his side in the tie and he denied Bakambu again after 31 minutes as he continued to atone for his early error.

Castillejo shot over from 10 yards and Ruiz headed off target, with chances coming regularly for Villarreal, who would soon regret not scoring a second goal.

Sparta levelled deep in first-half injury time when Brabec got clear of Mario at a corner and powerfully headed home his third Europa League goal of the season.

Mario hit the crossbar with a header immediately after the interval before Soldado forced a good save from Bicik.

Villarreal retook the lead after 62 minutes when Bakambu bent a fantastic finish into Bicik's bottom-left corner from 20 yards, the striker hitting his sixth goal in five Europa League matches at El Madrigal this season.

Bicik made a fine double-save from Suarez and Bakambu after 73 minutes as the La Liga side sought to put the tie out of Sparta's each, the goalkeeper also saving from Suarez in injury time.

The Czech outfit cannot be ruled out having beaten Krasnodar and Lazio on their way to the last-eight, but Villarreal's narrow lead gives them a slender edge ahead of next week's second leg.