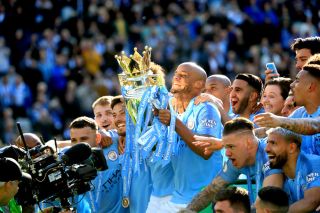 Vincent Kompany claims Manchester City have the hunger of lions as they chase more silverware in Saturday’s FA Cup final.

City secured their second trophy of the season as they finally saw off Liverpool in a thrilling Premier League title race last Sunday.

They can now complete an unprecedented domestic treble by beating Watford at Wembley and Kompany has warned that last week’s celebrations will not have blunted their edge.

The City captain, who has claimed nine major trophies with the club, said: “It’s not about adding that achievement to my CV – I don’t care about my CV.

“I know this team and they are like a pack of lions. When this team is hungry, they are such a special team. I’m going to do everything I can to put a bit of blood in that water, so this team gets even hungrier.

“We’re a big team and there’s no denying this. I’m so eager to play the FA Cup final. I’m so motivated.”

City showed their champion qualities as they won their last 14 Premier League games to hold off Liverpool by just one point.

That determination, under intense pressure, saw them become the first side to retain the title in a decade.

Kompany played an inspirational role towards the end of the run-in, most notably with a stunning winner in the penultimate game against Leicester.

The 33-year-old, whose future is unclear with his contract due to expire this summer, said: “My style is pretty simple.

“Every now and then when things are getting too comfortable, I go a little aggressive in training or I speak up and say what I think.

“But the main thing is that these guys, together with the manager, are always able to understand what the priority is. We focus on winning games.

“Winning one title was not enough, it had been done before. Back to back – that is special.”

City are clear favourites against a Watford side that have won just one of their last six games since their semi-final victory over Wolves, but Kompany will take nothing for granted.

The Belgian said: “You can’t be complacent going into any game. To have reached this final and coming up against Watford is an achievement in itself, but now we need to try and win it.”