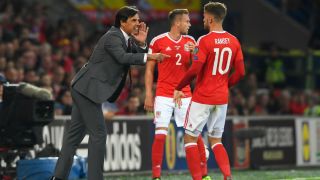 Wales boss Chris Coleman says his players have earned the right to be considered a golden generation as they prepare for a critical World Cup qualifying clash with the Republic of Ireland.

A win in Monday's meeting in Cardiff for either side would guarantee a place in the play-off round and could be enough to seal an automatic spot in Russia, depending on group leaders Serbia's result against Georgia.

Wales have not appeared at the World Cup finals since 1958 but have made history in the last two years, reaching the semi-finals of Euro 2016 after having climbed to an all-time high place of eighth in the FIFA rankings in October 2015.

Coleman believes his side now deserve to be considered part of their country's "golden era" and says Monday's showdown is the biggest game they have yet to play.

"I fought against it when they were labelled the 'golden bunch' before we qualified for the Euros but now they've earned it. This is a golden era," he said, as quoted by The Daily Telegraph.

"[This game] is as big as anything we've been involved in.

"Dare to dream? I meant every word of that. I say that because I've seen the other side. That's why I don't have any fear. We look forward to these games because I've been in positions where I didn't know if I'd still be in a job if I'd lost that next game. To be sat here now is an absolute joy.

"If you could bottle the feeling for football the nation had three years ago and compare it to now, it is night and day. It's an event now in Wales when the team plays. The excitement is incredible.

"Two years ago, a game like this would have been brand new. I don't want to sound flippant but we've been sat here before with these big games and we've got that experience."