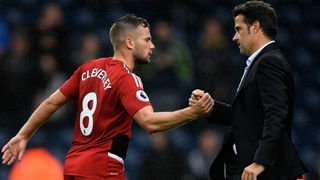 Marco Silva praised his side's "big" character after Watford fought back from two goals down to grab a dramatic draw at West Brom.

Richarlison was Watford's hero for a second successive weekend, as the Brazilian headed home Jose Holebas' free-kick to make it 2-2 deep into stoppage time at The Hawthorns on Saturday.

The hosts had scored twice in three first-half minutes to seize control of the game, Salomon Rondon breaking the deadlock with his first of the league season before Jonny Evans headed in from close range to double West Brom's lead.

However, Abdoulaye Doucoure halved the deficit before the break and, just as it seemed their unbeaten record on the road this season would come to an end, Richarlison popped up with a leveller for Watford in the fifth additional minute.

"I believe nobody in the stadium or watching it would say we didn't deserve the point. We came here to play our game with our philosophy and we knew that would involve taking risks," Silva told BBC Sport.

"They (West Brom) want that - to sit and wait for our mistakes. But we don't change because that's our way.

"In some moments we were too slow in the first half. I told our players at half-time if you continue the same way we'll achieve a good result.

"The first 30 minutes of the second half we played really well. We had clear chances. They defended well, they're a strong team but we showed big character."

| Marco Silva full of praise for his side, following a deserved point at West Brom. September 30, 2017

Richarlison was also Watford's hero at Swansea City the previous Saturday, scoring a 90th-minute winner at the Liberty Stadium.

"Richarlison is an amazing talent. I told my board I want this player because I believe in him," Silva said of the signing from Fluminense.

"We never know how he'll react coming from Brazil. Brazilian players can have problems in another country but he's been really good."