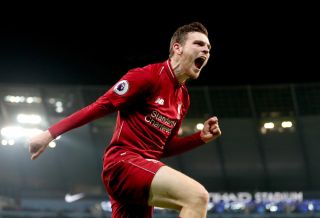 Andy Robertson admits Liverpool head into the week living in hope rather than expectation as their title dreams and Champions League future hang in the balance.

A dramatic 3-2 win at Newcastle on Saturday took them back to the top of the Premier League table with a two-point advantage over Manchester City.

However, having played one match more than their tile rivals, they are now hoping Leicester – on Monday – or Brighton next weekend can do them a favour.

There is also the task of trying to overturn a 3-0 deficit at home to Barcelona in the Champions League semi-finals on Tuesday, but the Scotland captain insists while there is hope they have a chance.

“The pressure is on both of us (Liverpool and Man City) the whole season but we can sit back knowing we are not playing Monday,” he said.

“We can hope for Leicester to produce something but we don’t expect anything. City have had eight days to prepare, there will be fresh legs and it will be tough for Leicester – but we can always pray.

“Yeah, I’ll watch it. Obviously we have a huge game the next day so I’ll be resting up but if it’s on the telly I’ll watch it and hope, but I’ll not get too involved.

Liverpool go into the week, however, with doubts over the fitness of leading scorer Mohamed Salah.

He scored his 26th of the season at St James’ Park but was then carried off on a stretcher after colliding with goalkeeper Martin Dubravka.

Manager Jurgen Klopp remains optimistic and Robertson admits the injury affected the team for a while, just like it did in last May’s Champions League final when the Egypt international was forced off early on with a shoulder injury.

“Horrible. I spoke to him in the dressing room and he was up, to be fair, and was awake at least,” said the left-back.

“I think it was just concussion or whatever, I’m not a doctor. It’s not nice because he doesn’t stay down easily or get stretchered off.

“Maybe that knocked us for five minutes but at least we got the win.”

Jurgen Klopp’s side showed their battling qualities at St James’ Park after twice finding themselves pegged back before snatching a winner four minutes from time.

Virgil Van Dijk and Salah both had goals cancelled out by Christian Atsu and Salomon Rondon before Salah went off with a head injury.

However, his replacement Divock Origi popped up with a late header to take the title race to the final day.