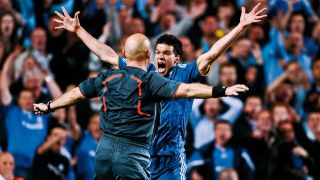 The referee for Barcelona's Champions League semi-final second leg against Chelsea in 2009 was forced to change his hotel in the wake of the controversial clash at Stamford Bridge.

Tom Henning Ovrebo was at the centre of a firestorm during the clash nine years ago, in which Barca snatched a dramatic 1-1 draw to secure passage to the final on away goals.

Eric Abidal was controversially sent off, but it was Chelsea who were most angered by the officiating, as they saw six appeals for a penalty waved away by Ovrebo.

The last one came in second-half injury time, after Andres Iniesta's stunning strike cancelled out Michael Essien's opener, with Samuel Eto'o escaping a handball shout that prompted Michael Ballack to chase Ovrebo down the pitch and argue his case.

Didier Drogba and Jose Bosingwa both received suspensions for their protests after the final whistle, while Ovrebo said he received several death threats from Chelsea fans in the following years.

The Norwegian, now 51, admits he made a number of errors and says his team even had to move hotels after the match, such was the level of anger at his decisions.

is coming … IniestaaaaaaaaaDo you remember where you were and how you celebrated when this goal was scored? February 18, 2018

"It wasn't my best day, that's for sure," he told Marca ahead of Barca's trip to Chelsea in the last 16 on Tuesday. "But referees can make those mistakes... sometimes a player or a coach can, too.

"I'm proud of having had a long career and having been among the European elite for a while, and among the best in my country, at least. That's why you can't remember my career just for that game.

"After the match, I didn't speak to any player. I left the pitch with dignity, I went to the dressing room, and that's that.

"Of course, I remember we had to change hotels and there were a lot of people who were hostile towards us. We had to be careful that day and the next.

"I can't change people's opinion. But it would be interesting to ask Real Madrid fans, for example, whether they would have the same opinion of me if it had been in favour of their team, instead of Barca.

"We have seconds to decide. Then you see it on TV and you say: 'Oh my God, I was wrong with that penalty or red card!'. These are normal things.

"I was responsible for the decisions that were made and we can argue that, if I had made others, maybe Chelsea would have reached the final. We'll never know."

Ovrebo admits he should have penalised Eto'o and Gerard Pique for handball in the penalty area and also suggested he should have sent off Ballack for his protests.

"Of course [I remember] and, yes, they were handball situations," he said. "I judged them on the pitch and I think it isn't interesting now to know what I think of every incident once it's been judged, although I understand people think differently to how I refereed. That discussion will carry on forever.

"The important thing was to learn from my mistakes. I made the decision not send him off [Ballack] and that's it.

"It's difficult to explain why decisions are made and not others on the pitch. Maybe it's due to pressure... or in that event it could be because Ballack protested from behind and I didn't see it. There can be many reasons in each decision."

Ovrebo says Chelsea's triumph in the 2012 tournament – when they beat Barca in the semi-finals – helped to stop some of the hateful messages he received, and he insists he is not haunted by that 2009 clash in London.

"Some fans will remember me after this interview, but I have no problems. People can do what they want. I have a happy life with my friends and family in Oslo. I've already accepted my mistakes."