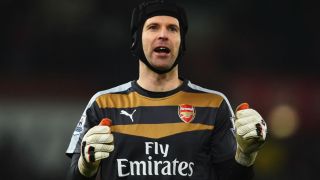 Arsene Wenger's men - who have not won away at Stoke since 2010 - had lost on each of their last two visits to the Britannia Stadium.

But Cech played a key role in ensuring Arsenal avoided defeat in Staffordshire this time around.

The Czech Republic keeper made a vital double stop to deny Joselu and Bojan Krkic after 55 minutes. Striker Joselu was then frustrated by another Cech save in the final minute of normal time.

"We were coming here and we heard from everyone that we were going to lose again," Cech told Sky Sports after keeping a clean sheet that marked his 10th against Stoke.

"We showed everyone that we can compete.

"In the circumstances we take the point and we move on. I thought particularly in midweek [in a 3-3 draw with Liverpool] we were unlucky to concede late goals. We take the point.

"We are in the position we wanted to be, we go to the home game [against Chelsea next Sunday] and we are ready to compete again.