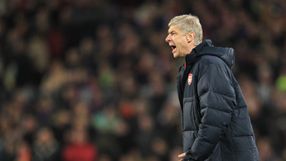 Arsenal lost the last-16 second-leg match 3-1 to go out 4-3 on aggregate and Wenger was furious at a second yellow card shown to striker Robin van Persie in the 56th minute for kicking the ball after the whistle sounded for an offside decision.

At that stage the score was 1-1 at the Nou Camp, with Arsenal 3-2 ahead on aggregate.

Wenger remonstrated with Swiss referee Massimo Busacca after the match, following him down the tunnel to continue speaking.

Van Persie claimed he had not heard the referee's whistle before blasting the ball wide. Wenger told a news conference the decision was "embarrassing" and said UEFA representatives at the game had been shocked by the decision.

Nasri has also been charged with improper conduct for his comments to the referee after the match, while Van Persie could also be in trouble after describing the decision as a joke, saying that Busacca had "been bad all evening."

Wenger was given a one-match ban for improper conduct in 2007 for showing dissent against a referee's decision in a Champions League match.

Wenger and Nasri will have their cases heard by the UEFA Control and Disciplinary Body on March 17.