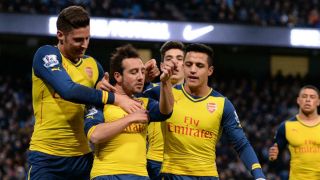 Arsenal manager Arsene Wenger has heralded Santi Cazorla as the perfect role model for young players aspiring to impress at the top level.

Spain international Cazorla was in impressive form as Arsenal triumphed 2-0 at Premier League champions Manchester City on Sunday, scoring the opening goal from the penalty spot.

Wenger believes the attacking midfielder is reaping the rewards for his versatility and feels the young players in his squad can learn from the way he plays the game.

"Cazorla has started playing centrally - he played wide a lot and now he's at a level of his career where he can have more influence centrally," Wenger said.

"He's been fantastic because he gets you out of pressure in very tight situations. He finds openings that are very interesting.

"He is a good example for young players, he shows you how important it is to be two footed in the middle of the park, it's a vital quality for a midfielder today and he does that very well. He loves the game."

Another midfielder was one of Arsenal's unlikely heroes at the Etihad Stadium with Francis Coquelin impressing.

Coquelin moved to the Emirates Stadium as a teenager in 2008, but has yet to establish himself as a first-team regular.

But Wenger stated he never had any doubts over his quality and suggested a loan move to Charlton Athletic earlier this season has aided his development.

"I took him from France at the age of 16. Today he is 23," Wenger added. "He has gone through some difficult periods but he's a learner from his experiences.

"I've always kept faith in him, because I told him three months ago that he needed to play somewhere. He accepted to go down to Charlton and had convincing performances.