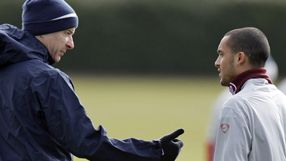 The England forward's current deal runs out next summer and he is yet to agree new terms at Emirates Stadium.

But Wenger believes the 23-year-old will not follow the likes of Robin van Persie and Alex Song to a premature exit.

"I think [he will stay]," said the Frenchman. “But I cannot tell you what he tells me.

"We are always in touch. He has character. He keeps focused and he wants to show he is 100 percent professional and I have a big respect for that attitude."

Walcott has made no secret of his desire to play as a central striker and was on target in Saturday's 3-1 win over West Ham United at Upton Park.

Wenger, however, believes the youngster can be equally effective anywhere across the forward line.

"Theo's game is based on movement off the ball, timing and finishing. He can play wide, he can play centre," he said.

"He has improved a lot in his finishing. Even if he plays wide or centre he gets in positions where he can score."