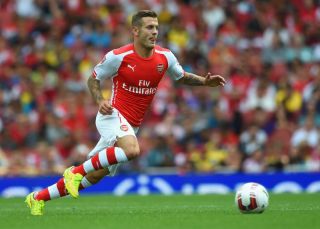 Wenger's men secured a battling 2-1 win over Crystal Palace on the opening day of the Premier League season on Saturday, Aaron Ramsey snatching the points with a close-range strike deep into stoppage time.

By that stage, Wilshere had already been withdrawn to conclude a laboured performance, with replacement Alex Oxlade-Chamberlain having a positive influence on the Arsenal midfield.

Wenger sympathised with his player, who he revealed suffered from a sickness bug in the build-up to the Palace match, backing the playmaker to progress with his injury problems hopefully behind him.

"He was sick in the last few days and I felt he started to still miss some competitiveness," Wenger said, explaining the substitution.

"I had options on the bench as well.

"No [the criticism is not fair]. Let's give him games.

"For me the most important thing for him is not to have any problem with his ankle but it looks like he's on the right way on that front.

"He looks sharper every week at the moment."