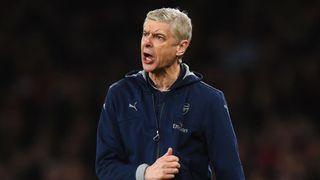 Arsene Wenger expressed his satisfaction at seeing Arsenal secure a 1-0 victory over Newcastle United despite being well below their best on Saturday.

Arsenal were strong favourites to claim the points against struggling Newcastle at the Emirates Stadium, but were made to toil by their visitors, who carved out a number of excellent opportunities.

"Our legs were a bit gone today. We were tested today against a good Newcastle side," Wenger said.

"To not drop points after the way we played today helped. Let's focus on the fact we are in a strong position. Newcastle played well. We showed the mental aspect of our team and we will need that.

"We played against a very good Newcastle team. I'm long enough in the job to know they must feel very bad. But I would like to give them some comfort. They've got good players and for me they had a convincing performance.

"On our side, we've shown qualities that are more mental today - organisation, dig deep, wait for your chances and score a goal.

"It was a very tight game between two teams - one with confidence and one with a bit less and we won it.

"It tests your team on different aspects, more on a mental front than on a footballing front and tests how much you are ready to suffer to win a game when you're not at your best."

On Cech's one-on-one save to deny Wijnaldum at the start of the second period, Wenger added: "One thing we could not afford today was to be 1-0 down and that was very important for us, it was vital to stay at 0-0 and hope we got a goal from somewhere.

"He made two big saves. He is calm and never panics. We needed that today.

"We have given a lot over Christmas. We knew nine points would be acceptable or even good in this period."