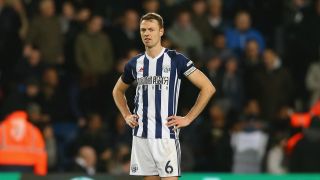 Arsene Wenger denied Arsenal are close to welcoming another new face to the Emirates Stadium, with the Premier League side reportedly keen on a move for West Brom centre-back Jonny Evans.

Evans, a long-term reported Arsenal target, continues to be linked with leaving West Brom, who have not won in the Premier League since August.

Arsenal have already bolstered their defensive options in the January transfer window by bringing in Greek centre-back Konstantinos Mavropanos from PAS Giannina, although Wenger has suggested the 20-year-old could be sent out on loan.

And Wenger, whose side were knocked out of the FA Cup by Nottingham Forest on Sunday, claims Arsenal are not closing in on Evans.

"No, I cannot give you any news on any transfer because we are not close to signing anybody," the Frenchman said in his post-match press conference.

"We signed a Greek boy [Mavropanos] who looks quite good in training but apart from that, we have not done anything.

"Will we be out there to do something? Yes we will."

3 - are the first side from a lower division to score three goals in an tie against Arsenal since Bolton in January 1994. Shock.January 7, 2018

Wenger had to watch from the stands due a three-match touchline ban as holders Arsenal were dumped out of the FA Cup in the third round for the first time in his 22-year reign.

But the 68-year-old denied his absence from the dugout was a factor as managerless Forest completed a famous 4-2 victory at the City Ground.

"No, I wouldn't say that," said Wenger, whose seven titles make him the FA Cup's most successful manager.

"I just think that we were not good enough anywhere, not at the front and not in the middle or at the back.

"We paid for it and they looked sharper, had more chances and that's all I can say. Nottingham Forest had an outstanding performance today. We couldn't fault any individual performance from Forest today.

On having to watch the game from the City Ground's directors box, Wenger added: "Bad. I hate it."