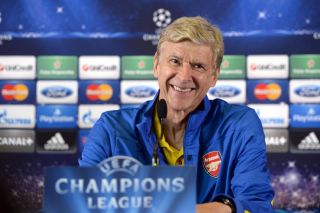 Wenger's men played Dortmund in the 2011-12 UEFA Champions League group stages, taking four points from them, and they will do battle again on Tuesday in Group F of this year's competition.

Arsenal top the group after successive wins over Marseille and Napoli and they also lead the Premier League after a stunning start to the season.

Wenger feels his team have progressed substantially since the last time they met Dortmund but knows they still have room to improve.

"I believe we are much better. Our young players have gained experience and maturity," Wenger said.

"The consistency of our results since January shows that. We are capable to be consistent and that is always a sign of quality, especially in the Premier League.

"The feel-good factor is down to what I have said many times; the quality of the spirit of the team, the solidarity of the players and the desire to do well. We are a team that looks to be successful, which needs a special hunger, and I think we have that.

"We have room for improvement and being in a position we are in at the moment, knowing we have that is of course a good thing.

"In life you can always improve and that search for improvement is what can make a top-level sportsman or top-level team.

"Collectively, the way we win the ball back and the use of the ball offensively we have room for improvement and for more consistency, and that's what you want from your players."

Wenger says he will ensure his players are focused on their own performance – and not that of Dortmund's – ahead of Tuesday's much-anticipated clash at the Emirates Stadium.

"What is important is that we go into the game and focus on our quality and our performance," he said.

"That is more important than focusing on Dortmund. If we play at our best we will be difficult to handle for everybody."

Wenger added that he expects to make a decision on his future at Arsenal early in 2014.