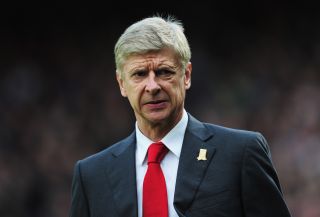 Arsenal lost 2-1 to the German outfit in the UEFA Champions League on Tuesday, but continued their magnificent form in the Premier League as they overcame struggling Palace despite going down to 10 men in the second half.

The visitors took the lead just two minutes into the second period as Mikel Arteta converted from the penalty spot, but the Spaniard was then sent off after 65 minutes for a foul on Marouane Chamakh.

Arsenal were still able to kill the game off in the dying stages as Olivier Giroud headed home from an Aaron Ramsey cross to maintain his side's place at the top of the league.

Wenger expressed his delight at the character his side displayed in stretching their unbeaten away run to 14 games in all competitions.

"They came at us; we dealt well with their long balls. We got one with two minutes to go that was a relief," he told BT Sport.

"It's a bit early, but it's nice to be there (at the top of the league), it's good as well to have a character of the team to respond after Tuesday."

Arsenal goalkeeper Wojciech Szczesny was forced to make a number of fine saves as Palace tried to press home their numerical advantage and earn a share of the spoils.

The Poland international feels belief in the squad has been key to Arsenal’s fine start.

"When Mikel got sent off we were a little bit under pressure.

"We come into every single game believing that we're going to get the three points, we're very confident, we're not afraid of anyone."