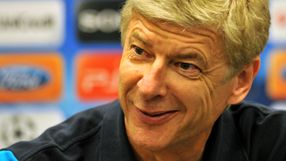 The former MK Dons and West Bromwich Albion manager took over the Chelsea hot seat in March after the sacking of Andre Villas-Boas, where Di Matteo was assistant coach, and has guided the Blues to the FA Cup final and Champions League semi-finals.

Chelsea have a slender one-goal lead in that Champions League semi-final against Barcelona following a display of resolute defending, and Wenger was impressed with what he saw of Chelsea.

"They defended well and took their chance. They did not have many but that is basically it," Wenger said.

"[Di Matteo] has done well. I think he has adjusted well to the club and to the team. You judge him if he gets a longer period though, like any manager. He has done very well until now and he is competent.

"Let's remember, sometimes when a guy comes in and knows the club it gives him an advantage to be quick [to adapt]."

Sixth-placed Chelsea travel to third-placed Arsenal knowing victory would move them to within five points of their North London rivals with a game in hand.

The game has been sandwiched in-between the Champions League semi-final, but Wenger believes Chelsea will show no sign of exhaustion come Saturday.

"I don't believe that [they will be tired] at all," he said. "You expect to be playing Chelsea at their best and you cannot expect them, with the players and numbers that they have, to be tired."

Arsenal will be without the injured Mikel Arteta who suffered an ankle injury in Monday’s 2-1 home defeat to Wigan Athletic, while on-loan Yossi Benayoun is unable to face his parent club.

However, the Gunners will welcome back Laurent Koscienly from suspension and Abou Diaby, who has returned to the first-team fold following injury.

Chelsea are likely to rest a host of players who started Wednesday’s 1-0 victory against Barcelona and are still without the suspended Branislav Ivanovic and injured David Luiz.