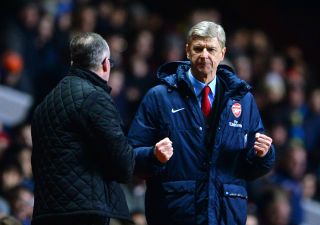 The visitors had looked comfortable as two goals in as many first-half minutes handed them a commanding lead at Villa Park.

Jack Wilshere netted the first after capping a wonderful flowing move with a neat finish from the edge of the area, while the same man provided the second with a chipped pass that Olivier Giroud controlled and side-footed beyond Brad Guzan.

The visitors were equally as comfortable in the second period until Christian Benteke grabbed his first top-flight goal since September, diving to meet Matthew Lowton's superb cross from the right.

Arsenal held firm, however, to rack up their fourth win in a row in the Premier League and avenge the 3-1 defeat to Paul Lambert's men on the opening day of the season.

And Wenger believes his side have shown an ability to cope with the physical nature of the Premier League by withstanding Villa's late pressure.

"They made it very physical, put the ball up high in the air and we had a very good resilient performance in the second half. Overall we have shown again both sides of the game."

The win sees Arsenal return to the summit of the Premier League table, and Wenger urged his charges to focus purely on their own performances in the race to be crowned champions.

He added: "Let's take care of our performances, we have got to go forward and always get the points. Then we can see if we can make a difference with the other teams."