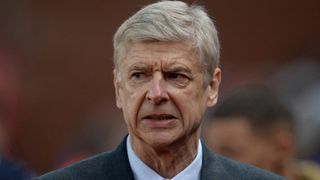 Arsenal played at Wembley in the Champions League for two seasons between 1998 and 2000 after being forced to cut their ticket allocation at Highbury by 6,000.

Wenger's side failed to make it out of the group stages both times, dropping points against Lens, Dynamo Kiev, Fiorentina and Barcelona.

Chelsea have applied to play at Wembley from 2017 onwards while they upgrade Stamford Bridge, while Tottenham are also looking for a temporary home while they build a new ground.

But Wenger warned the club's that there may be dire consequences.

"It was a nightmare [for us]," he said. "In hindsight it was the wrong decision.

"We decided to go to Wembley, but we didn’t feel at home. The pitch was bigger, the ground was different and for the English players it was something completely unusual.

"We were used at Highbury, to a tight pitch and unfortunately we were playing against Dynamo Kiev, who were running everywhere on a very big pitch. It was a disadvantage for sure.

"There's less a disadvantage now because the stadium is a bit different but the pitch is exactly the same."

Asked whether Arsenal would share the Emirates with their London rivals, Wenger said: "Not really, because we suffered a lot to build this stadium and had to be very tight financially to pay it back.

"I don't know, but I don't feel it is in our plans. We don't need it and we have not been approached for it as well. It's a board decision, not mine."