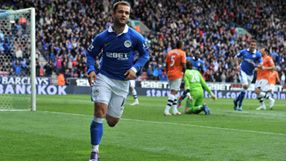 Wigan came flying out of the blocks with Victor Moses scoring twice in the opening 15 minutes and they were 4-0 up by halftime with Shaun Maloney and Franco Di Santo adding the others.

"We have reached a good level in the last stages of the season, with a clinical finish in the last third," Martinez told Sky.

"I am sure many people will say Newcastle had a bad day, but we played really well and we deserved it."

Newcastle boss Alan Pardew said: "If you don't have the intensity that matches the other side you are in trouble, and we didn't today and they got the early goals that changed the face of the game.

"They were superb and can take great credit from this victory - they were excellent."

The result at Wigan threw the race for Champions League places wide open.

Manchester United and Manchester City, who meet at the Etihad Stadium in what is virtually the title decider on Monday, will fill the first two places, while Arsenal look set to finish third even though they could only draw at Stoke where Robin Van Persie's 35th of the season cancelled out Peter Crouch's opener for the home side.

Arsenal have 66 points, four clear of Newcastle, but it is no longer definite that the fourth-placed finisher will qualify for the Champions League.

If Chelsea, who are sixth, beat Bayern Munich in the Champions League final next month and finish outside the top four, they will take the last qualifying spot as holders.

Aston Villa, embroiled in the relegation fight, drew 0-0 at Midlands rivals West Bromwich Albion and although they have only won once in 14 matches, they stayed 15th on 37 points, ahead of Wigan on goal difference.

Manager Alex McLeish, who was jeered by fans when Villa lost at home to Bolton on Tuesday, told the BBC: "I have had to show my experience and leadership and that has come to the fore. I will not curl up and die. I will persevere to the end as I always have done."

Sunderland ended their four-match run without a goal with a 2-2 draw against Bolton as Kevin Davies scored twice for the visitors to keep alive their hopes of avoiding the drop.

Davies put the strugglers ahead after 26 minutes before Nicklas Bendtner equalised for Sunderland who took the lead early in the second half with a James McClean free-kick.

Davies saved a point for Bolton who stayed in the drop zone but have a game in hand on their rivals.