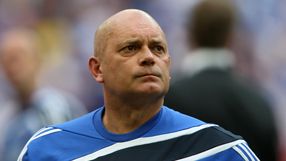 Carlo Ancelotti's former assistant left Stamford Bridge on November 11 after being told his contract would not be renewed but Wilkins is unhappy with the way he was treated.

"I am very disappointed that the board decided that I had no further contribution to make at Chelsea Football Club which has played such a huge part in my life," Wilkins said in a statement issued by the LMA.

"Since rejoining the club, I am extremely proud to have assisted in Chelsea's recent successes. I enjoyed a fantastic relationship with the staff, players and the supporters and I now wish them all the very best for the future.

"The LMA's legal advisors are assisting me in obtaining answers to a number of questions arising from my undoubtedly unfair dismissal, and all efforts are being made to reach an amicable solution."

Wilkins, 54, began a distinguished playing career at Chelsea where he made his league debut in 1973. He went on to play for Manchester United, Milan and Rangers and also won 84 England caps. He returned to the club's coaching staff in 2008 under former manager Luiz Felipe Scolari.