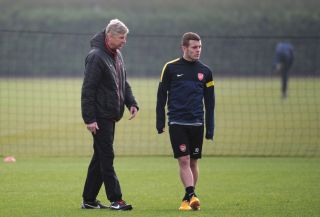 The Frenchman has come under scrutiny after failing to land high-profile transfer targets such as Luis Suarez, Gonzalo Higuain and Luiz Gustavo.

And the London side's misery was further compounded by a 3-1 defeat on the opening day of the Premier League season at home to Aston Villa.

But England international Wilshere leapt to his manager's defence and, despite signing a new five-year deal in December, said he would consider his own future at the club if Wenger were to leave.

"I want to win things with Arsenal and I want to be there in the future," Wilshere told Zapsportz.com.

"But if the boss leaves then things could change.

"Arsenal are always in my heart and by signing a deal for the next five years (it) shows my commitment to them and their commitment to me, so at the moment everything is good.

"Arsene Wenger has been there for so many years and he's always delivered trophies.

"We've had a little dip in the last five or six years, but he's a great manager and people who question his ability are ridiculous.

"He's qualified for the Champions League for 16 years so I think he's the right man for the job."