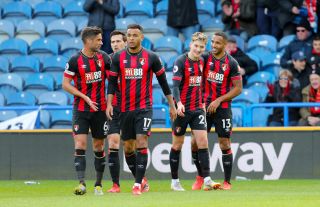 Callum Wilson scored on his return to action as Bournemouth halted their away-day blues with a 2-0 win at bottom club Huddersfield.

Wilson, back from a seven-week injury lay-off, chested home a first-half opener and laid on Bournemouth’s second for Ryan Fraser in front of watching England boss Gareth Southgate.

The Cherries snapped a nine-game Premier League losing run on the road, while a 15th defeat in 17 league matches for Huddersfield nudged them closer to the trapdoor.

Bournemouth carved out the first opening when Wilson’s low shot from inside the right edge of the area was comfortably saved by Huddersfield goalkeeper Jonas Lossl.

But Wilson, back in Eddie Howe’s starting XI after a knee injury, did not waste his second chance as Southgate looked on to assess his fitness before naming his squad for next month’s Euro 2020 qualifiers on Wednesday.

Fraser scampered clear down the left and his cross was chested home by Wilson at the far post with Lossl stranded.

It was Wilson’s sixth goal in seven league appearances against Huddersfield and his 11th in the Premier League this season.

Neither side created further first-half chances, with Bournemouth’s back four in particular in cruise control as Huddersfield squandered all their possession in the final third.

Town boss Jan Siewert replaced the ineffective Philip Billing with Chris Lowe during the interval and the German left-back delivered the kind of cross they had been lacking soon after the restart.

But another opportunity had gone begging and after a swift Bournemouth counter-attack, Wilson was denied what would surely have been his second goal when Jan Gorenc Stankovic intercepted King’s ball across the area.

But Bournemouth showed how it was done in front of goal when striking a decisive blow in the 67th minute.

Wilson raced on to King’s defence-splitting through-ball and showed great awareness to cut the ball back for Fraser to sweep home from six yards.

King forced Lossl into a smart save soon after as Bournemouth threatened to cut loose before Siewert replaced Kachunga with teenage winger Aaron Rowe, who made his Premier League debut.

Another half-chance fell to Town but Grant’s effort was blocked by Chris Mepham, and then Bournemouth somehow failed to score their third.

Nathan Ake’s header from Fraser’s free-kick was headed clear by Jorgensen and when the ball bounced on the goalline neither King nor Wilson reacted quick enough.

King volleyed wide in the closing stages from another Fraser cross as Bournemouth sealed their first away success since the end of October.