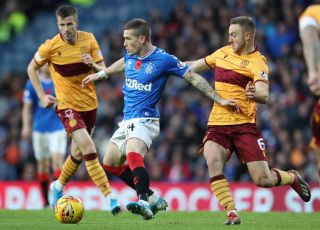 Motherwell assistant manager Keith Lasley believes the club are reaping the benefits of their players’ willingness to improve.

Almost 12 months on from a 7-1 thrashing at Ibrox, Stephen Robinson’s side took the lead at the same venue on Sunday before conceding a late goal in a 2-1 defeat.

Motherwell made major progress after the turn of the year and the loss of most of their regular midfield and attacking players in the summer has not set them back.

They can regain third spot in the Ladbrokes Premiership by beating Kilmarnock at Fir Park on Wednesday.

And Lasley feels the reason behind their success is a simple but far from universal ingredient.

“I think it’s hard work on all counts,” he said. “It sounds a bit cliche but everyone playing their part.

“It’s all right us coming up with a plan and the manager coming up with the way we want to go about things, but the players have to buy into that. They have to do the work and be willing to improve.

“It’s all right saying we want to improve but my experience with players over the years, sometimes they are quite happy being pretty comfortable and it’s taking them out of their comfort zone and making these players believe they can be better, both individually and as a group.

“I think we’ve got that in that dressing room, guys who want to be better than they have been and want to improve on a daily basis.

“And when you have got that mix of a hungry staff and a hungry set of players, then I think results come off the back of that.”

Motherwell impressed at Ibrox after diverting from their normal 4-3-3 formation to move to a three-man central defence with two up front.

Lasley said: “Obviously you give them a lot of information in a short space of time but they have got to implement it in a big arena in a high-pressure situation which is different again, it’s OK doing it on a training pitch.

“We have a good group of guys who want to learn and want to get better and the game the other day was a good example of that.

“It’s encouraging but it’s not what you have done, it’s what you are going to do.

“We have two massive games now at home and it’s up to us to use those positives and continue to improve the things that were good.

“We are going to need another two top performances, Kilmarnock are up to third and are on a really good run.”