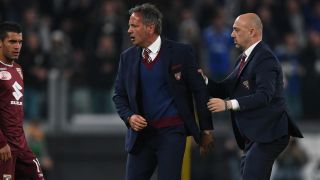 Ghanaian midfielder Afriyie Acquah was sent off after receiving two yellow cards in Torino's 1-1 draw at Serie A champions and leaders Juventus.

Both yellows were debatable as Torino played out the final 33 minutes with 10 men but former Juventus striker – now TV pundit – Vialli felt the cards were warranted, which angered Mihajlovic post-match.

Appearing on Sky Sport Italia afterwards, Mihajlovic – who was sent to the stands as he protested Acquah's dismissal – took aim at Vialli's view of the red card.

"Vialli said that's a foul. I consider that blasphemy! He got the ball cleanly. I don't care what you say," Mihajlovic said.

"You are on television, you are supposed to be impartial, everybody saw it was not a foul!

"You are the only one defending this. You should be fair in your judgement and you are not! Either that or you need a pair of glasses!"

Adem Ljajic's 52nd-minute free-kick put Torino ahead away from home but Gonzalo Higuain equalised in stoppage time as Juventus capitalised on their numerical advantage.

"I could see from the touchline he [Acquah] got the ball cleanly. It doesn't take a nuclear scientist to tell that. What is the fourth official there for? He was in an even better position to see than me,” Mihajlovic told Mediaset Premium.

"It was an unjustifiable mistake and not the only one, as in the first half we got three yellow cards for a perfectly fair game. I went to the fourth official and asked why don't you help the referee? He must've seen it better, the referee didn't whistle for a good six or seven seconds, so he too was waiting for help.

"I went over the top, I know that, but it was an unjustifiable error. Playing here down to 10 men is hard for everyone, we might've equalised anyway, but at least give us a chance.

"I don't know if the referee made this decision or, even worse, the assistants told him it was a foul, because they were in a better position to see that it wasn't."