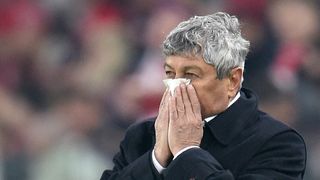 Zenit have announced the sacking of manager Mircea Lucescu after the club missed out on Champions League qualification.

The 71-year-old led the club for a single season and Zenit confirmed the Romanian's contract has been terminated early after they finished third in this season's Russian Premier League.

Lucescu led Zenit to six wins in their last seven league games of the campaign but it was not enough to secure a place in Europe's elite club competition in 2017-18.

"Zenit thank Mr Lucescu and his coaching staff for all their hard work, we wish Mr Lucescu all the best in his next career move," read a brief Zenit statement.

Lucescu, whose sole Zenit honour was the Russian Super Cup in July 2016, won eight Ukrainian league titles during his 12-year spell in charge of Shakhtar Donetsk between 2004 and 2016.