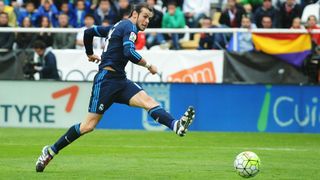 Rayo led 2-0 after 14 minutes at Vallecas thanks to goals from Adrian Embarba and Miku, but Bale, making his return from a back problem, halved the deficit 10 minutes before half-time with a header.

Karim Benzema then came off with an apparent knee injury, but Madrid – missing Cristiano Ronaldo because of a thigh issue – were still able to complete the comeback.

Benzema's replacement Lucas Vazquez levelled matters in the 52nd minute, with Bale pouncing on a stray pass to fire home the winner nine minutes from time and pile the pressure on Barcelona and Atletico Madrid in the Liga title race.

Zidane said: "I am very happy and he is very happy to make a difference. He did great. Physically he's fine. Beyond the two goals he has done a very good job offensively and defensively.

"It is very important for him and for the team. He has had some discomfort and today [Saturday] has been phenomenal.

"It is not easy what we have done. We have shown that after conceding goals we can turn the game around. They have had the patience to make a difference and then we know we have quality players that make a difference.

"Occasionally you have to have that patience when things do not go well.

"We have struggled and we have overcome. This match is good before City. Now it is another battle. A totally different game. We're going to prepare well."