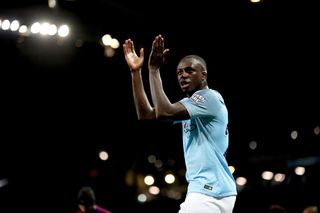 Pep Guardiola has warned Benjamin Mendy there are no guarantees of a place in the Manchester City side for Saturday’s FA Cup semi-final against Brighton.

Quadruple-chasing City will need to make a change at left-back for Saturday’s clash at Wembley after Oleksandr Zinchenko limped off during Wednesday’s 2-0 Premier League victory over relegation-threatened Cardiff.

The result took City back to the top of the table, a point above title rivals Liverpool with six games remaining.

Zinchenko, who has established himself as first-choice left-back in the absences of Mendy and Fabian Delph this season, lasted just 19 minutes before succumbing to a hamstring injury.

Danilo switched from right-back to cover but Guardiola admits the Brazilian is not a natural in the position.

That raises the possibility of a recall for £49.1million man Mendy, who is now fully recovered from the knee injury that has kept him out for most of the last five months but appears out of favour.

The 24-year-old was the subject of disciplinary action earlier this season when he reported late for treatment after attending a high-profile boxing event the previous evening.

Further questions of Mendy’s status were asked this week after the Frenchman was spotted in a nightclub in the early hours of Saturday morning.

Guardiola said: “Zinchenko gave us a lot and he is an important player for us. He knows the mechanisms, he knows the way we want to play.

“But during the season this kind of thing happens if you play a lot of minutes. You accept it and we are going to find a solution. I don’t know right now which one because Danilo fought a lot to play in that position. I appreciate that a lot.

“It’s not his natural position but he fought a lot. We’ll see the decision we will take for the FA Cup semi-final.”

Asked about Mendy’s prospects, Guardiola said: “We’ll see how he feels, how he trains. We don’t have many options.”

City were without top scorer Sergio Aguero against Cardiff and, with Wembley in mind, made seven changes in total.

Yet they were still far too strong for the Bluebirds, who are now five points adrift of safety with no games in hand on any of their relegation rivals.

Goals from Kevin De Bruyne and Leroy Sane early and late in the first half proved enough, although dominant City racked up 27 attempts on goal.

A handful of them came from impressive youngster Phil Foden, including one shot against the post, on what was the 18-year-old’s long-awaited first Premier League start.

“Phil, we know it, he’s young but he can do everything,” said Guardiola.

“For the next decade, he will be important.”

Another @premierleague victory for us! 🙌🏼🎱 See you at Wembley on Saturday 🏟⚽ #EPL#CmonCitypic.twitter.com/EsGHpTnyn4— Ilkay Gündogan (@IlkayGuendogan) April 3, 2019

“I think we have to win three out of six and get a draw somewhere,” said manager Neil Warnock.

“But I think we can get results from all of the last six games.”