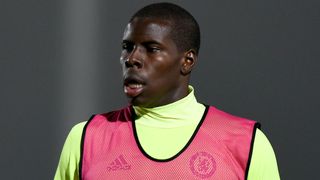 Kurt Zouma scored twice in a penalty shootout on his return to competitive action on Tuesday as Chelsea's Under-23 side prevailed on penalties against Oxford United in the EFL Trophy.

The French centre-back featured in the development side's previous two outings as he sought to build fitness on his comeback from an anterior cruciate ligament injury sustained during February's 1-1 draw against Manchester United.

Zouma completed 90 minutes at Stamford Bridge as the Chelsea XI played out a 1-1 draw with their League One opponents, before twice holding his nerve from 12 yards as the hosts prevailed 13-12 in a remarkably prolonged penalty showdown.

Earlier, the 22-year-old received treatment following a blow to the face but showed no ill effects, continuing as Josimar Quintero's opener was pegged back by Oxford's Kane Hemmings deep into stoppage time.

Here's on his return to action at Stamford Bridge. Our development squad currently lead Oxford thanks to Josimar Quintero's goal. November 8, 2016

Elsewhere in the competition, which was opened up to Under-23 sides in England's top two tiers this season alongside the core League One and League Two competitors, a strong Stoke City line-up also required penalties to see off Bury.

Giannelli Imbula, Marc Muniesa, Peter Crouch and Bojan Krkic all started and the latter two combined for the ex-Barcelona forward to cancel out  George Miller's goal in a 1-1 draw.